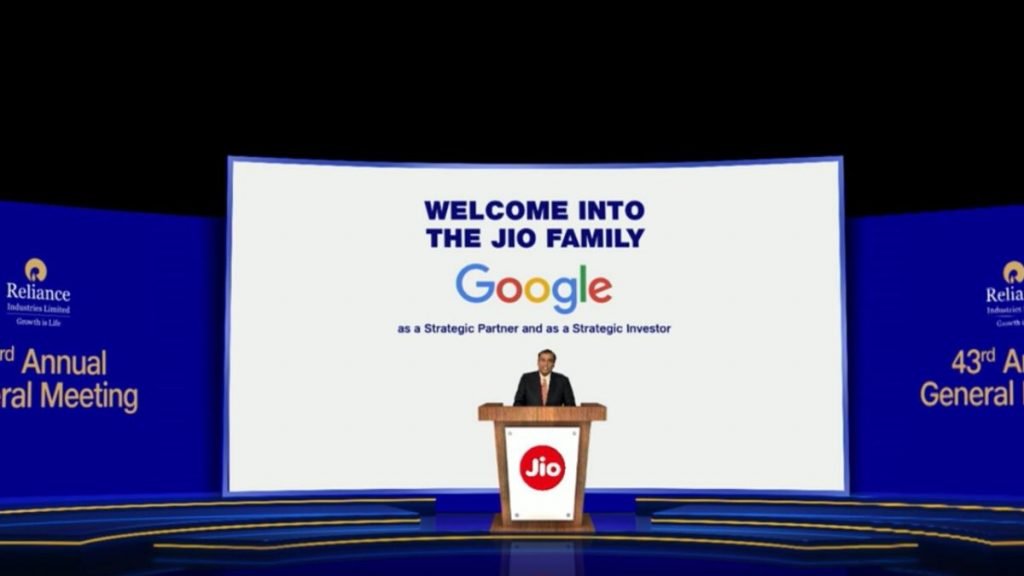 During the AGM, Ambani also announced that Google and Jio Platforms will be developing an Android-based smartphone operating system that could power a value-engineered, entry-level 4G/5G smartphone to create a “2G mukt bharat.”

The investment comes only days after Google announced its plans to invest INR 75,000 Cr ($10 Bn) in India under the ‘India Digitization Fund’ to help the country unleash the potential of its digital economy. The company had highlighted that the fund would be used to invest in India through a mix of equity investments, partnerships and operational, infrastructure, and ecosystem investments.

Sunder Pichai, CEO of Google, confirmed that the investment in Reliance’s Jio Platforms is a first and the biggest investment through the ‘India Digitization Fund’. “I am excited that our joint collaboration will focus on increasing access for hundreds of millions of people, who don’t currently own a smartphone while improving the mobile experience for all,” Pichai added. Morgan Stanley acted as financial advisor to Reliance Industries and AZB & Partners and Davis Polk & Wardwell acted as legal counsels. Meanwhile, law firms Freshfields Bruckhaus Deringer US LLP and J. Sagar Associates advised Google on the transaction. Google is currently the third-largest stakeholder in Jio Platforms, following tech giant Facebook that holds a 9.99% equity stake in the company and Reliance Industries that hold the rest of the business.

When one considers the massive adoption for Google’s tech ecosystem in India in recent years, Jio has played a major part in that growth thanks to the penetration of its 4G services. This has not only helped push Android deeper into the country but has brought more users to Google search and YouTube, even from rural India.